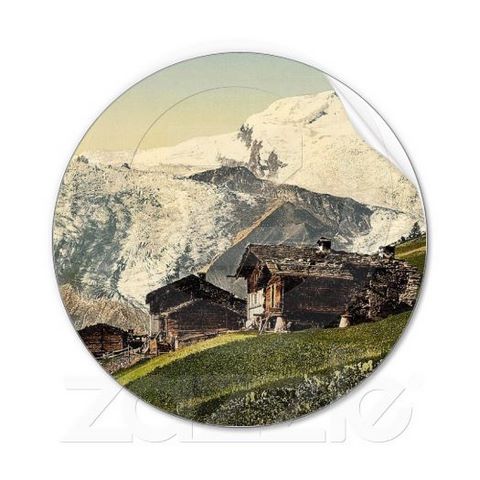 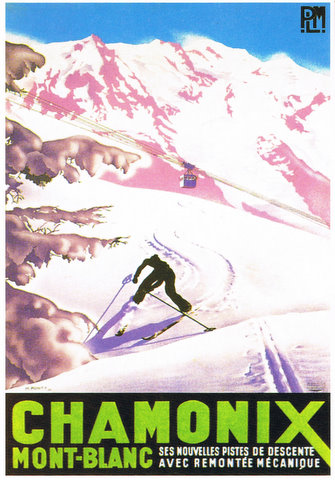 I almost didn’t get there, due to misbehaving Icelandic volcanoes… but  a thousand km drive in a borrowed Jag XJ6  got two of us to Saas Fee by Saturday evening.  Seven intrepid venturers out of the planned group of eight made it there, one way or another.

After that, the rest is going to have to be the easy bit! 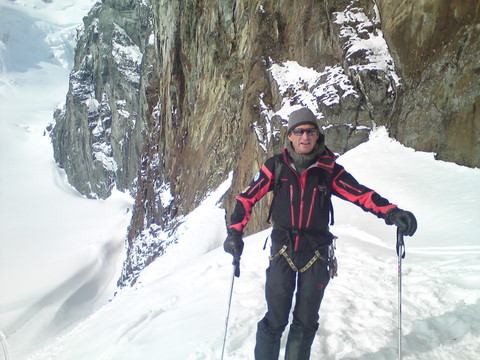 Sunday  – Breakfast, meet the other guys and one girl, all seem to be good company, so that’s a good start.  We meet our genial Swiss guide Klaus in the hotel and set off up to climb 2 ½  hours over the Alallein pass towards Zermatt. Just a warm up for the week...

Sandwich stop at Taschalp, some rapid first aid work on an early blister, then a descent in very tricky crusty snow down to Tasch where we run out of snow to ski on.

A short taxi ride gets us into Zermatt for a night in hotel. Oh yes, and a few drinks… but the rest is just a blur… 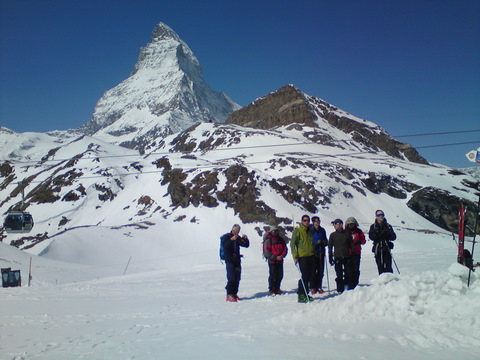 Monday – Bill and I meet with some friendly Swiss girls who show us how to do  superfast carving on the pistes of Trockener Steg below the mighty Matterhorn. Considering we are on touring skis, we manage to keep up very well with the fillies.

A quick reality check, then we sober up and meet Klaus and the group at Schwarzsee ready for action. 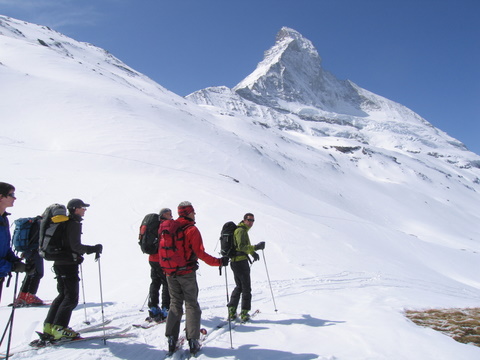 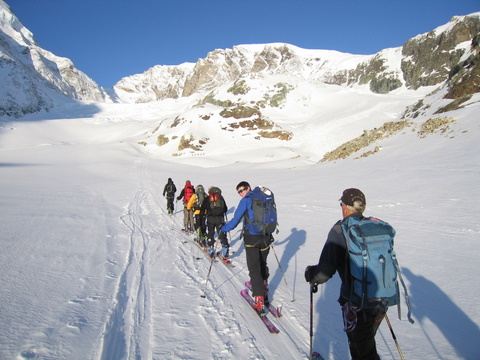 From Schwarzsee we descend to Staffelalp on firm powder, then start a 2 ½ hour climb to the Schonbiel hut, the last part being quite steep with many kick turns on icy slopes. 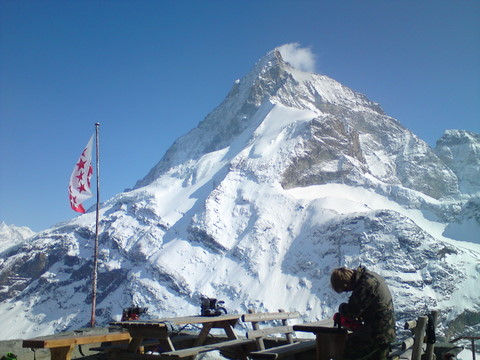 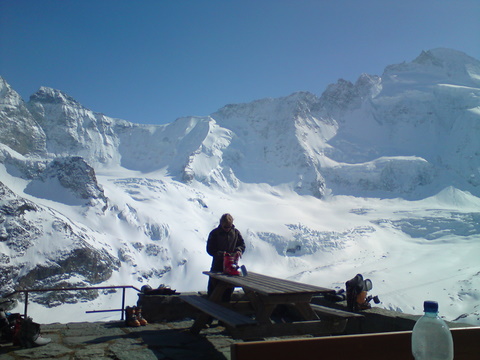 Views from the Schonbiel hut

Dinner under the watchful eye of the Matterhorn’s north face, then into bed; but literally not a minute’s sleep that night for me, too much adrenalin in the system, I just count the hours to dawn. 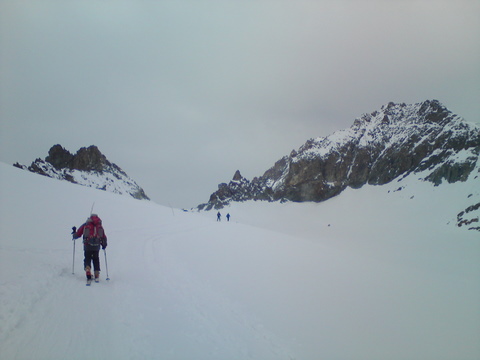 Out of the hut at 6.30am. A short ski down into the valley below on very icy slopes.  Edges!!

Then skins on and a long climb for many hours up the Zmutt glacier, past the Tete Blanche at 3724m. Phew!  Lack of sleep begins to take its toll.... 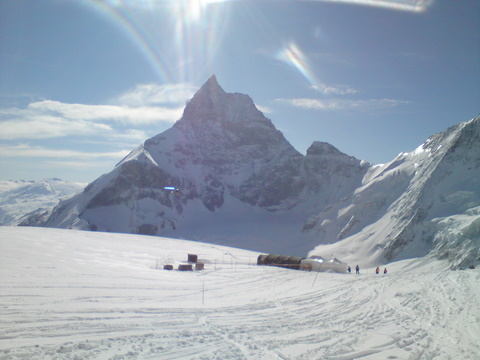 Preparations are under way along the route for the Patrouille des Glaciers race on the 21st, earnest Swiss soldiers are camped out  everywhere.

This is a ski touring race from Zermatt to Verbier carried out every two years by maniacally fit people dressed in Lycra.  Normal people take three days to get there. The racers do it overnight in 7 hours.

We arrive at the foot of the Bertol hut after 7 hours on the move. 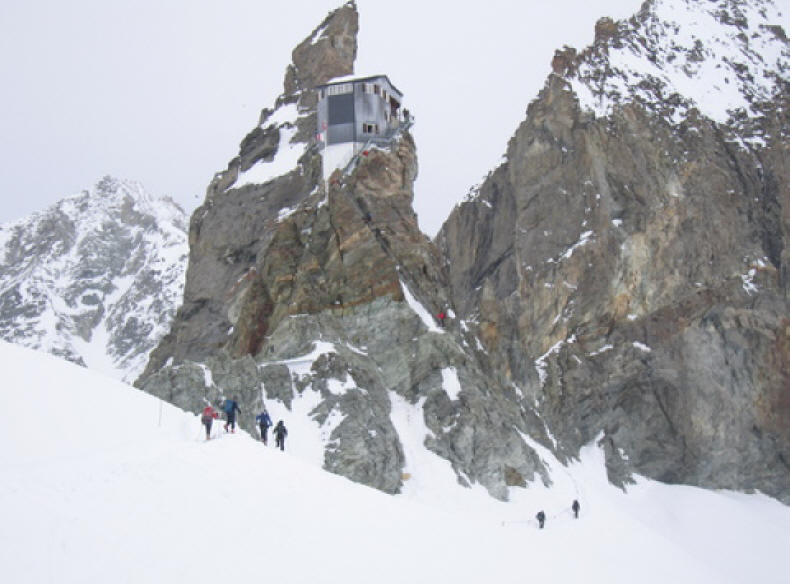 Getting into the hut is scary.

Ropes fixed to the rock face give a hand grip while boots slip on icy rock, a long climb up iron ladders, with precarious transfers between ladders.. this hut was built for mountaineers, not skiers.

The toilet facilities are best not described in detail .... but the signs are clear enough... 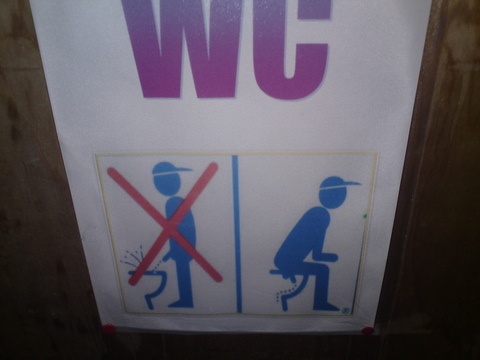 Dinner, and another long night, but I do catch an hour or so of sleep.

Wednesday – On the road at 6.30am as usual.  Getting down from the hut backwards was even scarier than climbing up. 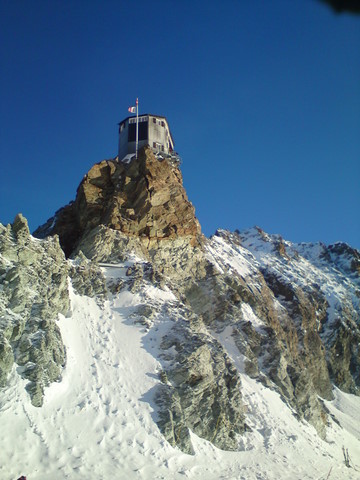 Climb down that backwards with 10kg backpack!

But it’s a beautiful sunny day and we enjoy some great runs in the first hour as we ski down to the Arolla glacier.

Then begins another long climb up and over the Col d’Eveque at 3392 m, really feeling the altitude as we slog on to the Vignette hut, a 4 ½ hour climb.

I fall into a zen-like state in which the mind detaches from the body. I imagine that the body is just a donkey, the mind is the rider; from time to time the donkey protests that it cant carry on; it then needs a good whipping which the rider is happy to give it.

When the whipping doesn't work any more, Mind tells Donkey about all the lovely things that it will get at the top of the hill - yummy food, big drinks and other carrots.

When carrots no longer work, Mind tells Donkey he is going to get rid of the lazy sod and turn him into sausages.

But eventually the Vignette is in sight, (perched on the rock here if you look carefully) and Don Quixote arrives at his destination. 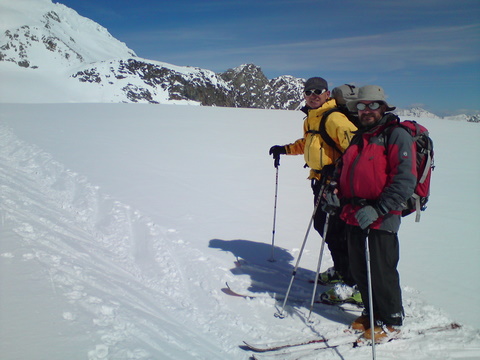 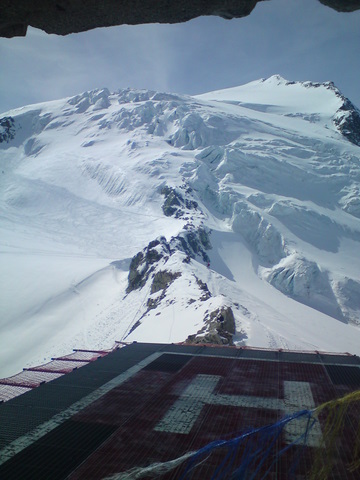 Approach to the Vignette viewed from the hut helipad. Hey .. there's a thought....

Vignettes is crowded to full capacity, this is a popular overnight rest on the main Haute Route.  The Hut is quite luxurious in comparison with the Bertol 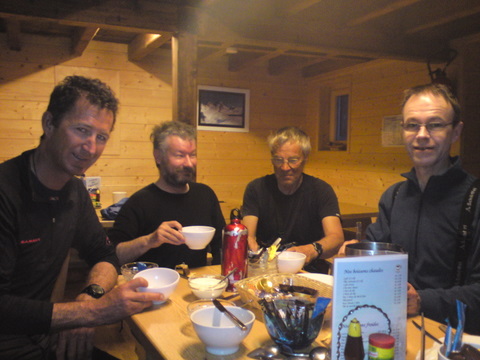 and that night I sleep through at last. Heaven!! 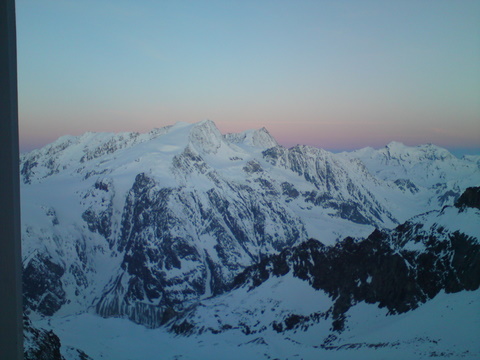 Dawn from the Vignette

Today is where we deviate from the classic route and take a southerly variation into Italy.

Rest and a bite, 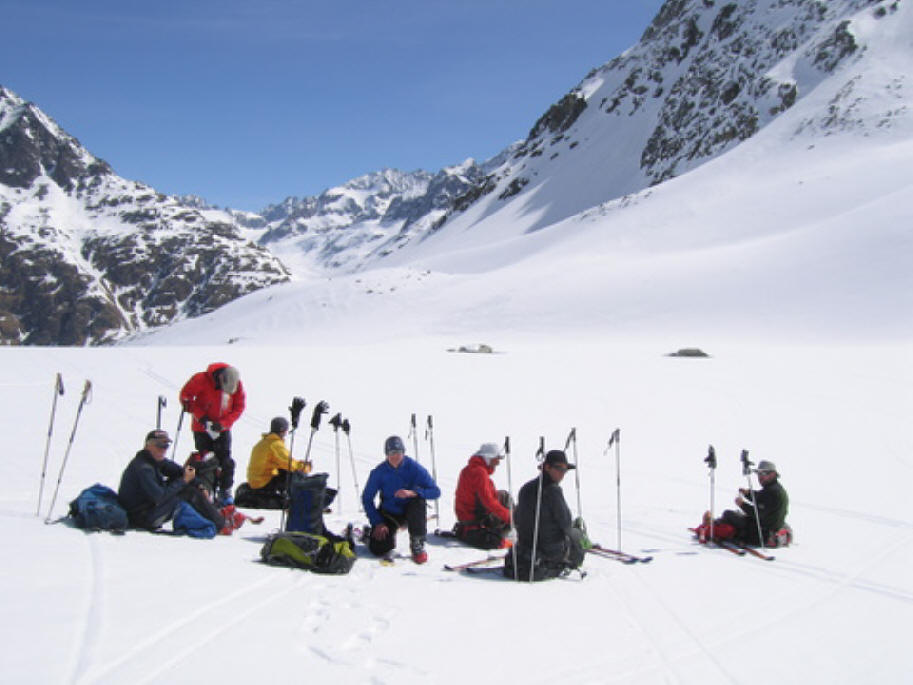 then a glorious descent through beautiful powder to the Cabane de Chanrion. 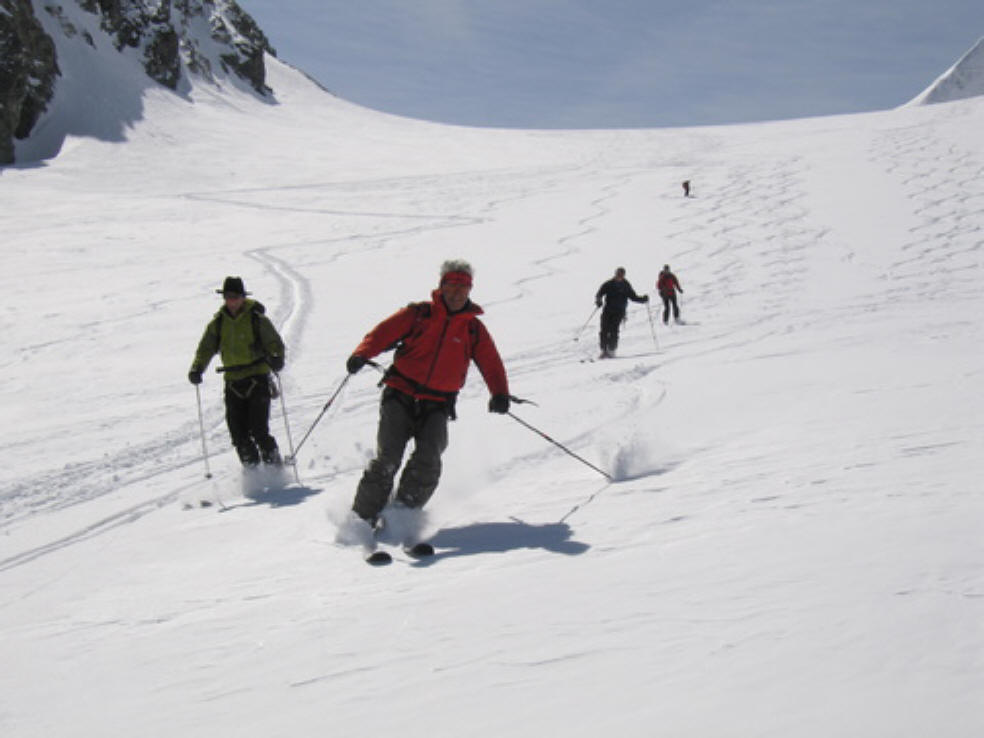 Yee haw!! C'mon Klaus do try to catch up.

We get coffee and cakes at the Cabane. Such luxury!

Finally a long skin of three hours up to the Col de la Fenetre Durand at 2797 m.  I am feeling very fit now after a good night’s sleep and I race with the others to the top with gay abandon.  I also find the time to test out my new personally developed skinning style involving giant hip swings, which resembles a penguin doing the lambada, to gain a few inches on each stride.  It seems to work though.

We reach the Col de la Fenetre, the Italian border, and this point marks the end of our serious climbing in the trip. 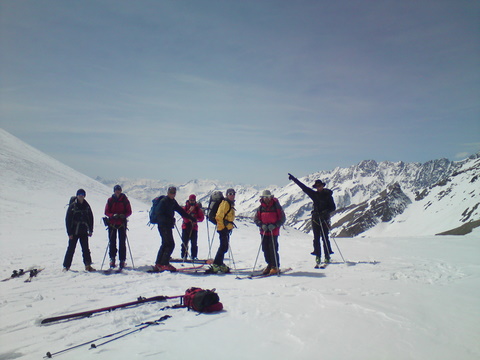 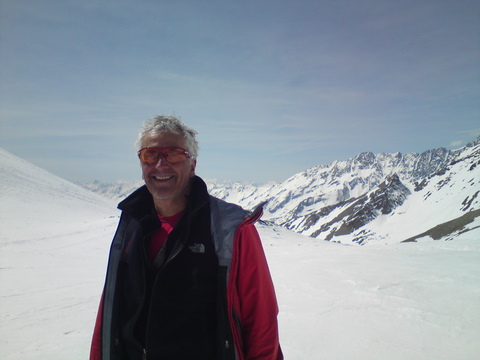 As is evident, I am very happy to have made it!

Celebration on the Col de la Fenetre. Klaus is very happy too, he got us there in one piece! My trusty skis and backpack in foreground.

We ski down a beautiful never-ending run towards Italy and plod for miles along the flat valley floor, poling ,poling.... The snow gets slushy, then we enter a forest where ‘skiing’ becomes a matter of hopping over branches and roots from one patch of snow the next.  A good test of agility, ingenuity and technique! 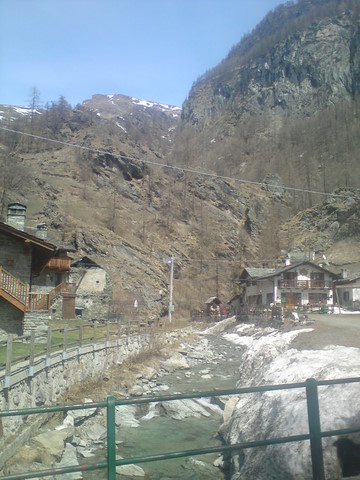 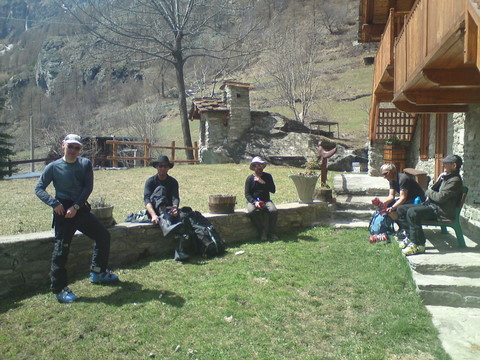 Eventually we emerge from the trees at the tiny hamlet of Glacier, Italia, gratefully take off our boots (ahhh!!) and wait in the sun for a taxi to take us to Courmayeur and a real hotel – with showers.

Big dinner party in the evening, and bubbly birthday drinks all round. 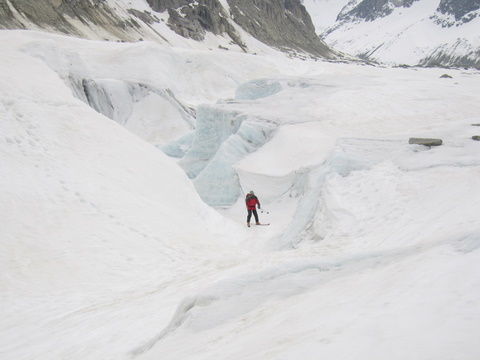 Friday – this is the last day and all we have to do is ski from the shoulder of Mont Blanc down the Vallee Blanche into Chamonix.  For many skiers the the Vallee Blanche is sold as a major day trip in itself, but we are just picking it up on the way home…  a piece of cake.

We catch lifts up from Punta Hellbrunner to the Col de Geant at 3369 m and begin a superb descent down the Glacier, past massive ice walls, crevasses and icy water ponds. 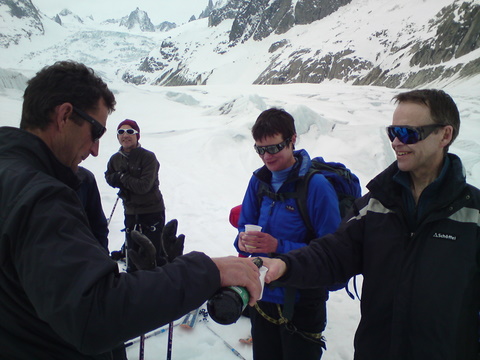 A lunch break amongst the ice pools, and Klaus magically produces a bottle of wine for a celebratory drink!

And so we arrive in Chamonix, and enjoy BIG drinks on the terrace of the smartest bar in town, seven gnarly skiers amongst the smart Chamonites. 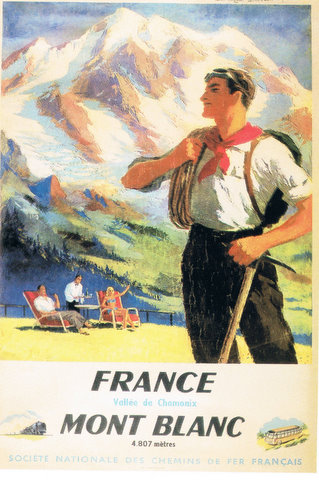 I may not look like this healthy chap, but it’s how I feel!

It’s been a great trip.